What's the difference in between the red Bourbon and yellow Bourbon?

I have ended up three different Bourbon varieties as beans; yellow, orange and red. Are they the same variety, just cultivated in different times of the maturity of the coffee cherries? Or, are they three separate varieties with separate cherry color when they are mature?

They are different varieties (at least 2 of them, red & yellow)

The original Bourbon was the Red. Founded in the Bourbon Island (now Réunion) near by 1790 aprox at carried it by the French to Africa and America (Brazil).

Then, in 1930, a natural mutation of the (Red) Bourbon was found at Sao Paulo (Brazil). This one:

The Orange, it's just another mutation. But I'm certain that is not a ripeness matter, it's a mutation/evolution thing.

To add a bit on the Yellow Bourbon varietal 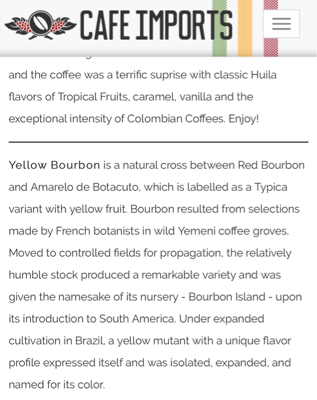 19
What is the difference between Robusta and Arabica?
11
Yemenite tea-like coffee?
26
Are robusta and arabica the only bean varieties?
4
Quantifying flavor differences between varieties?
2
What are the different varieties of coffee- understanding the nearest coffee shop menu?
8
What variables cause the Gesha/Geisha coffee varietal to be priced so highly?
6
How do flavors like vanilla and hazelnut get into coffee
9
How acidic is Liberica compared to Arabica and Robusta?
12
Does there exist a coffee which is not bitter?
3
Cafe Mai vietnamese coffee - what is the US equivalent?