Generally speaking, what do "cold brewed" methods hope to achieve compared to the more traditional hot-water methods of extraction?

Does the amount of caffeine vary between hot brewed and cold brewed coffee?

What about the other compounds such as Salicylic acid, phenolic acids, and amino acids?

My company builds flavor profiling and quality control tools for the craft beverage industry, using machine learning, data science, and analytical chemistry - let's use some of our 20,000+ coffee reviews to answer this question with data.

It has been claimed for some time that cold brew as a method of extracting coffee only exists to minimize the amount of acidity in the flavor profile. This is only a third of the story, and may not be true for the coffee you brew or consume!

So what is the full story? Read on!

But what about the rest of the flavor profile? Are people really planning to cold brew for hours in advance just for marginally less sour acids in the brew?

No. Higher-end cafes and roasters are producing cold brew coffee to target consumers who want a different flavor profile- optimized for consumption at a different temperature.

For this section of the analysis, I will be using the Gastrograph to communicate complex flavor profiles consistently and simply. On the Gastrograph, the intensity is shown ranging from 0, the center of the graph, to 5 (the outer most point).

Let's look at the difference in flavor profiles below: 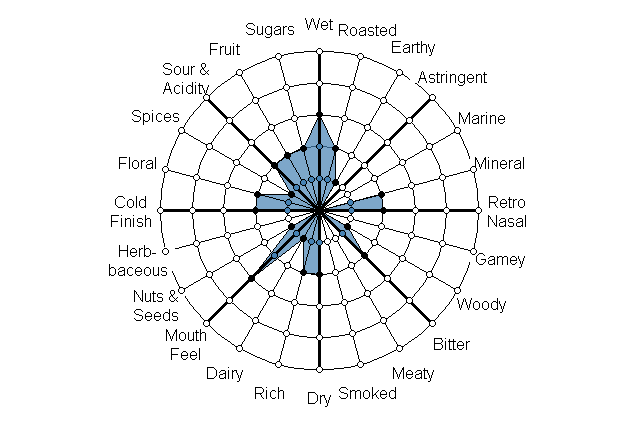 This is the Gastrograph of the average Cold Brew Full Immersion Coffee. 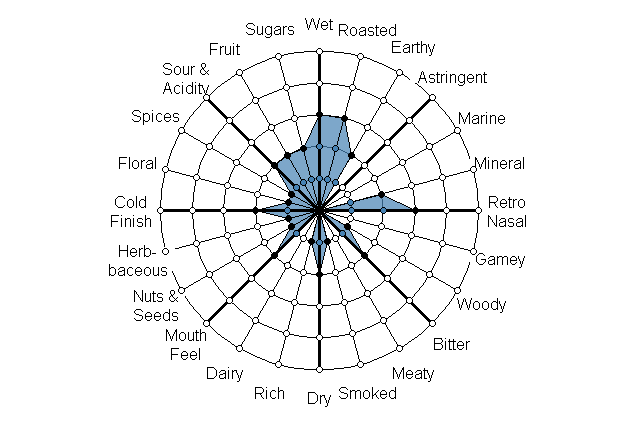 This is the Gastrograph of the average Hot Brew Full Immersion Coffee.

As you can see, these coffees differ on a much greater number of axis than simply sour and acidity - the goal is to make a different product with its own unique flavor profile, not to simply reduce acidity.

Finally, Cold Brew is actually an entire class of production methods that involve infusing coffee into cold water. There are 2 primary types:

(Reminder: Coffee brewed with hot water, and then iced is not Cold Brew coffee.)

Let's look at the 2 most interesting types of cold brews from the list above: 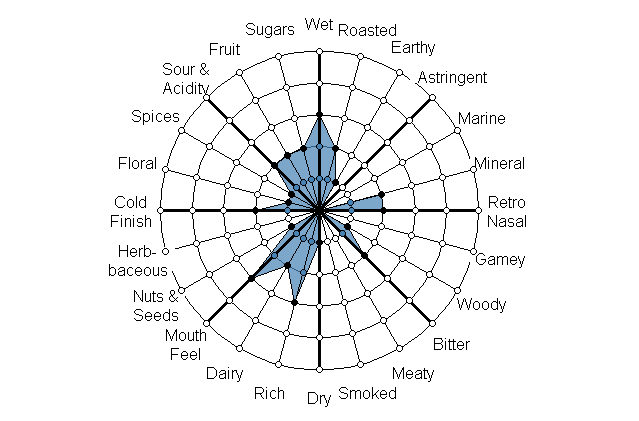 This coffee is served from a beer keg and pressurized with CO2.

This coffee is served from a beer keg and pressurized with nitrogen; the effect is a much smoother and fuller coffee, with a very thick and present mouth feel. 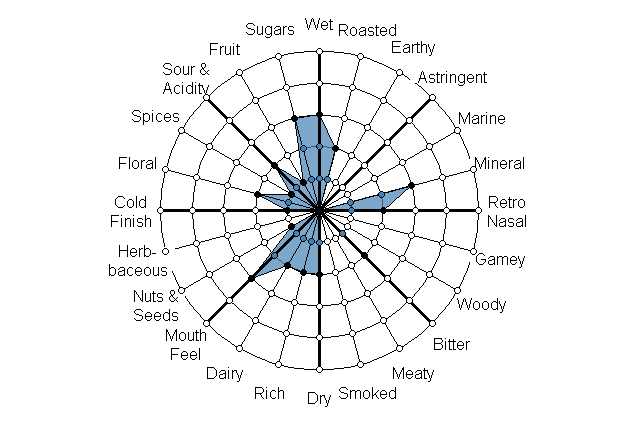 The cold brew coffee you make at home will be much closer to the average cold brew shown in the previous section, as I suspect few of the readers here will be making batches large enough to keg!

How do the concentration of compounds salicylic acid, phenolic acids, and amino acids differ between cold brew and hot brewed coffee?

It is not so much concentration that matters - it's perception. For example, phenolic acids are mostly volatile; in hot coffee more are evaporating, thus you can more easily perceive them. The same is true for salicylic acid (a precursor to aspirin, which is acetylsalicylic acid).

Also, These acids are more readily soluble and easier to extract in hotter environments. In cold brew not only do you extract fewer molecules of the acid, but the ones that you do extract will trigger a less potent olfactory response.

Amino acids are a trickier issue. The chemical nature of amino acids greatly varies (like in polarity and size, functional groups, etc). Most free amino groups will be consumed during roasting via Maillard non-enzymatic browning. On average, the cold brew would extract more, simply because it would have more time to come out of the coffee (during the average 6-hour steep time).

15
How does the temperature of the water affect the taste of the coffee
8
How can I emphasize the sweet, fruity notes of my coffee?
10
What do the terms extraction and strength mean?
3
What is the coffee & water ratio when cold brewing?

17
What's the recommended coffee to water ratio for cold brew?
25
What roast level is recommended for cold brew?
10
What do the terms extraction and strength mean?
11
How long will cold brew keep?
7
Cold brewing at varying temperatures - How does steeping temperature affect extraction?
2
Increase cold brew coffee concentration
3
How to save over extracted coffee made using Dutch cold brew method?
1
My coffee isn't acidic enough?
0
Question about coffee brew chemistry