Gasket in Rancilio "Miss" Silvia completely dried up and difficult to remove; is my machine totalled?

I have a very old (probably 1990's) Rancilio "Miss" Salvia. It was given to me by my uncle and I never bothered to service it until now. I feel ashamed obviously.

I put descaler through it today. But then I got the itch and now it's upside down and being inspected for a possible change of gasket seal and shower plate.

After removing the "screen" or shower plate, I'm wondering exactly what I'm looking at. This is a video of the Rancilio Silvia in a similar position to mine. I've removed the "little brass jet breaker" (as the man in the video calls it). But I'm unable to remove the "defuser" as he then does moments later. I believe they must have a newer model to me, as he seems to very easily take this "defuser". Mine seems like it's actually part of the group head. For the purposes of continuing to my issue; let's assume that's the case.

Here is a picture of my group head: 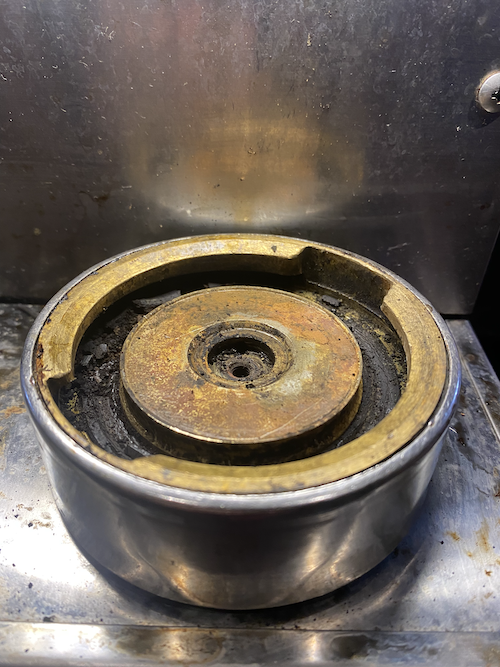 The issue is that the "gasket" that is supposed to act as a seal, seems completely hard and I'm trying to work out if I should just go ahead and dig it all out or whether what I'm currently digging into is actually part of the machine itself. It seems to me that I can just pick pieces of black, old gasket out if I try hard enough. But it doesn't all come out nicely like in the video. 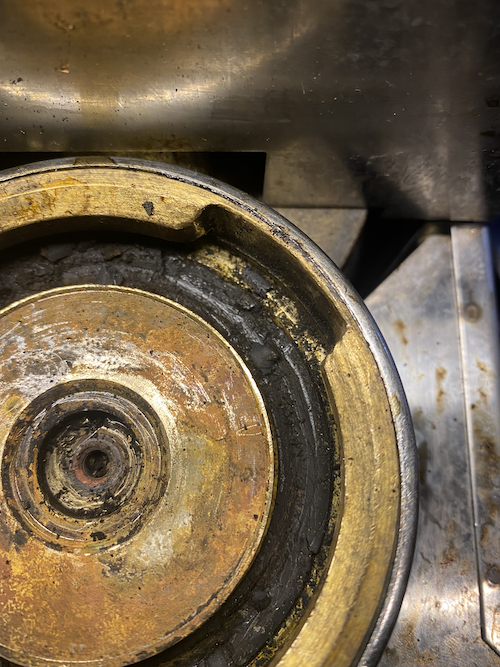 I suppose my question here is; should I just keep chipping away at the thing until it feels like I've got it all out; or should I stop and question whether the old "Miss" Silvia never had changeable gaskets - and I'm actually just ruining my machine by picking at it continuously.

Obviously I will need to try and locate a new gasket and probably shower plate for the machine also.

Either way the rubber has clearly become extremely hard - and perhaps I just need to bury the machine and begin the mourning process.

That gasket is certainly meant to be removeable. Old rubber gaskets will get hard and brittle, and it's probably glued in by coffe residue. So go ahead and remove it by any means necessary, short of damaging the rest of the machine. The group head is made of brass, a relatively soft metal, so be careful not to nick it.

Replace it with a new one made of silicone, those are way better!

Edit: The following is only valid for machines after 2006:

The diffuser plate should come of as well, but it will definitely be glued on by coffee residue. I need quite a bit of force on mine now and then. You can try to bathe it in coffee fat solvent like cafiza. Prepare a bath of hot water with some cafiza dissolved, soak your group head in it for a while.

This obviously requires that you are able to disassemble the group head from the machine. Maybe you can get away with filling the upside down group head with the cafiza solution.

Backflushing the machine with the help of a blind filter may also help.

8
Moka Pot Buildup
11
What is wrong if my espresso pours out slowly but the first drops shoot out?
6
Consequences of wrongly cleaning espresso machine with vinegar?
7
Non-plastic version of an AeroPress?
2
My home machine is broke. The single basket works but the double basket doesn't. Can baskets be broken/worn out?
3
Should any coffee be extracted during pre-infusion?
3
Weird espresso leak Delonghi Perfecta ESAM5600SL
1
Espresso Not Coming Out While Pump Turned On