I have a fully automatic machine (bean to cup coffee, around 1600 $) and have problems with excessive coffee consumption.

As a solution I have thought, it must be more difficult / less comfortable to make me coffee.

In a meme I saw different methods to prepare coffee. I am looking for something similar, something that is more manual. 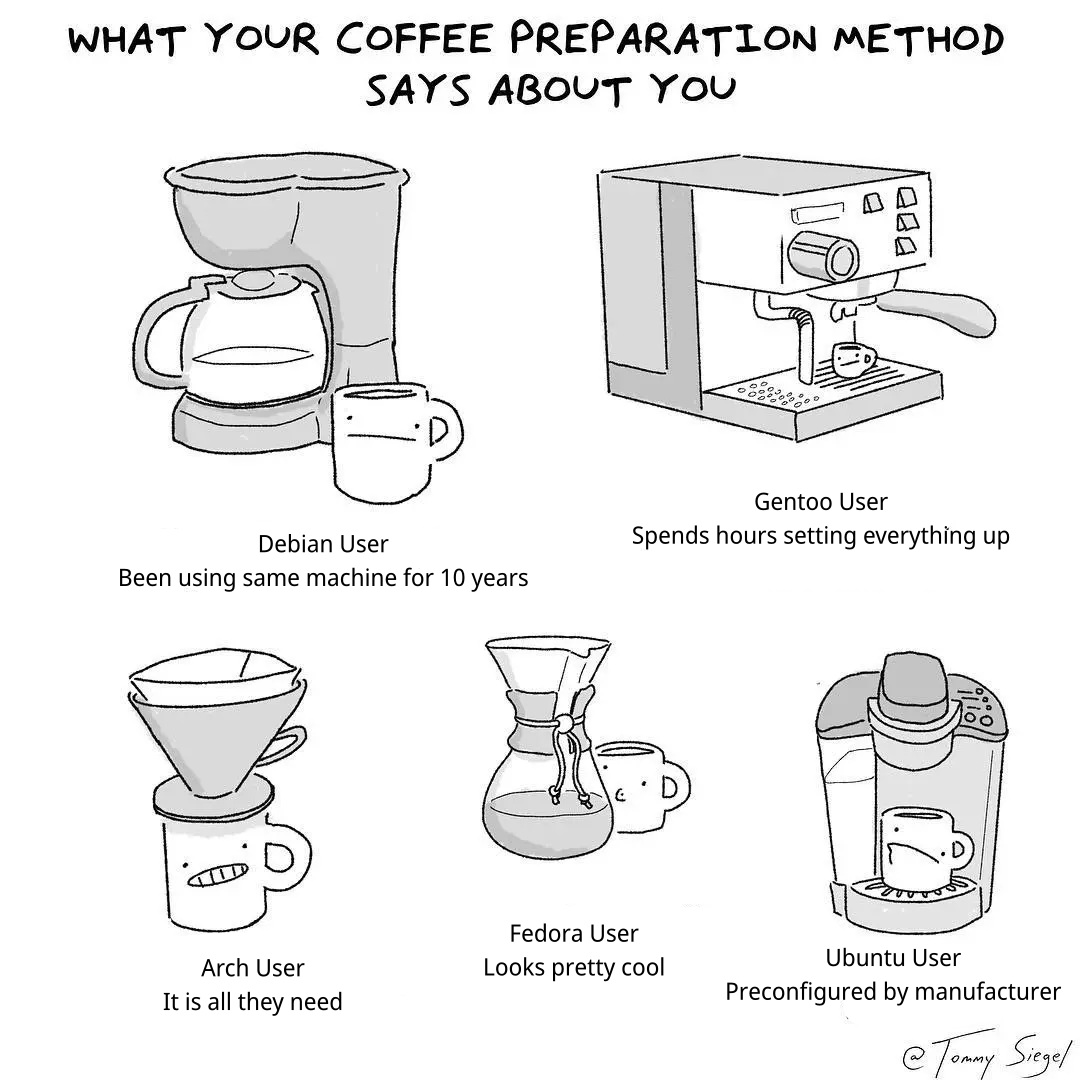 But now I do not know how to search for these devices in a store, because I do not know the name. Only the "Gentoo" and "Ubuntu" user I know.

Can you help me identify these devices and a very brief description of how it works.

The bottom right Ubuntu user looks like a coffee pad machine using Easy Server Espresso pods. I say this because it has the rounded bit above the cup which is where the coffee pad seems to go. Such machines work by inserting a paper pad containing ground coffee. The machine then pushes water through resulting in a cup of coffee. This requires the least effort because the pods can be bought in the store, there's no need to dose yourself and it doesn't need much cleanup after.

The top left Debian user is electric filter brewer or drip brewer. In the rounded part above the pot goes a paper or metal filter in which the user adds ground coffee. There's another compartment for water and turning on the machine heats the water brews the coffee into the pot. These kinds of machines often have a heating pad below the pod to keep the coffee hot, though some machines brew into a thermos pot without additional heating instead. This kind of pot is more useful for larger batches; it does require the user to dose the amount of coffee and it's a bit more cleanup (renewing the paper filter or cleaning out the metal filter).

The bottom left (Arch) and bottom middle (Fedora) look like V60 (v60) and Chemex (chemex) brewers, respectively. They are also filter brewers like Debian one except that they require the user to pour over the water manually. This gives some more control over the brewing process, for example by allowing a longer bloom. It may take less countertop space because these brewers are small enough to store in most cupboards.

The bottom middle Fedora user could also be a cloth filter brewer (they didn't draw the filter). In that case a piece of cloth is used instead of a one-time paper or reusable metal filter. This kind of brewing takes even more time because the cloth filter should be rinsed after each use and stored in a way that no mildew develops in the damp cloth. It's too much to go into here, but James Hoffman has a good video on cloth filter brewing.

Finally, the top right Gentoo user shows an espresso machine. This brewing method requires a finer grind of coffee which is tamped into a puck in a portafilter. The machine then pushes high pressure water through the puck to get a concentrated shot of coffee: espresso. Of the methods shown, this gives the user the most customization in terms of brew temperature, brew pressure, grind size, and extraction ratio (how much water to push through before stopping the brew). These aspects may be customized in some of the previous brewing methods too, but they'd have less influence because they use larger grind sizes. Dialing in these parameters can take a few shots (e.g. when changing beans) and each turn tempts one to taste before adjusting the parameters further. As such, I would not really recommend it for one trying to lower their coffee consumption.

With the goal of reducing coffee consumption, I'd lean toward the cloth filter brewing method. As it takes some extra time to clean up by rinsing the filter and storing it properly (submerged in clean water in the fridge) in addition to the manually pouring hot water over the grounds, I consider it quite a bit of effort for a simple cup. Before choosing this option though, I'd recommend watching James Hoffman's video on cloth filters which paints a picture of how involved / rewarding it can be.

There are two other brewing methods I feel are worth mentioning: the moka pot and the French press.

The moka pot is a metal stove-top brewer. At the bottom is the water chamber with a funnel to the coffee ground compartment above it. When the water is heated on the stove, the water pushes up through the coffee and into the top chamber where the brewed coffee goes. It's a bit like espresso though the brewing pressure is much lower. These pots come in different sizes. The brewer needs to be taken apart after each use to take out the used coffee, rinse everything off and fill the water and coffee compartments again. I'd say the moka pot is comparable to the cloth filter in terms of effort though it's a bit more forgiving because it doesn't have the mildew issue.

The French press is a different brewer to the ones we've seen before. It's an immersion brew in which the ground coffee and the water sit together for about 5 minutes after which a metal filter is used to separate the grounds from the brewed coffee. It's a bit less involved than the moka pot and cloth filter but it still requires cleanup (removing the wet ground from the brew chamber and rinsing everything off) before a new cup can be brewed.

22
What is coffee bloom

8
What machine is Caffe Vergnano using to make my coffee?
2
What's the simplest/cheapest coffee maker that can make a good latte automatically?
3
Manual vs Automatic espresso machine
1
Fine-grind French Press - Sacrilege? Better method?
4
Lower-end Manual Espresso
1
How can I make only a single shot on Delonghi EC9?
3
How can I make coffee without a machine?
3
Why does a coffee pad machine make such a smooth delicious coffee?