Is there actually any taste (especially flavor) difference between Dalgona method and normal method of making instant cofffee?

The coffee that concerns me is here.

Case 1: Here's a video about Dalgona (most likely it's Dalgona) method coffee.

The video is in Hindi, but I'll translate it in English from 2.35s:

He says, "Let's shuffle/mix it for some time. This shuffling is done because when you do it, the coffee granules/particles release its flavors"

And I've heard similar views about flavor thing heard from a few of my friends.

Case 2: One comment under my this question says you can make this kind of coffee by just adding boiling water and milk and you're done.

If you're going to use instant coffee, just pour hot water on it, add milk to taste, and you're done

I can use the method suggested by Chris H, as ingredients are same and it will save a lot of my precious time but I'm just surprised I don't see any tutorial on it on YouTube. So I wonder if it is right method or wrong or it is a right method but pretty rare.

Secondly, do both methods actually cause a difference in taste about its flavor or make it more thick? I mean the flavor reason given by the YouTube user is actually a scientific reason? Or could be just his personal opinion?

(Of course, there would be a difference in taste, but I'm more concerned about his flavor logic)

PS: Why I think that the YouTube user is right about releasing flavors thing is because it turns to creamy thing after some time. So it feels like something has chemically changed inside it. So I feel that's the reason it tastes different. But I need to verify this claim.

My first instinct was to answer “no way, that’s instant coffee, where there’s no complex flavor to start with, we can stir the heck out of it and get no change”. On the other side, preparation can make a huge difference sometimes, so just dismissing the method shouldn’t be done either. Of course there’s only one way to tell, which is by doing a side-by-side comparison. And that’s what I did. 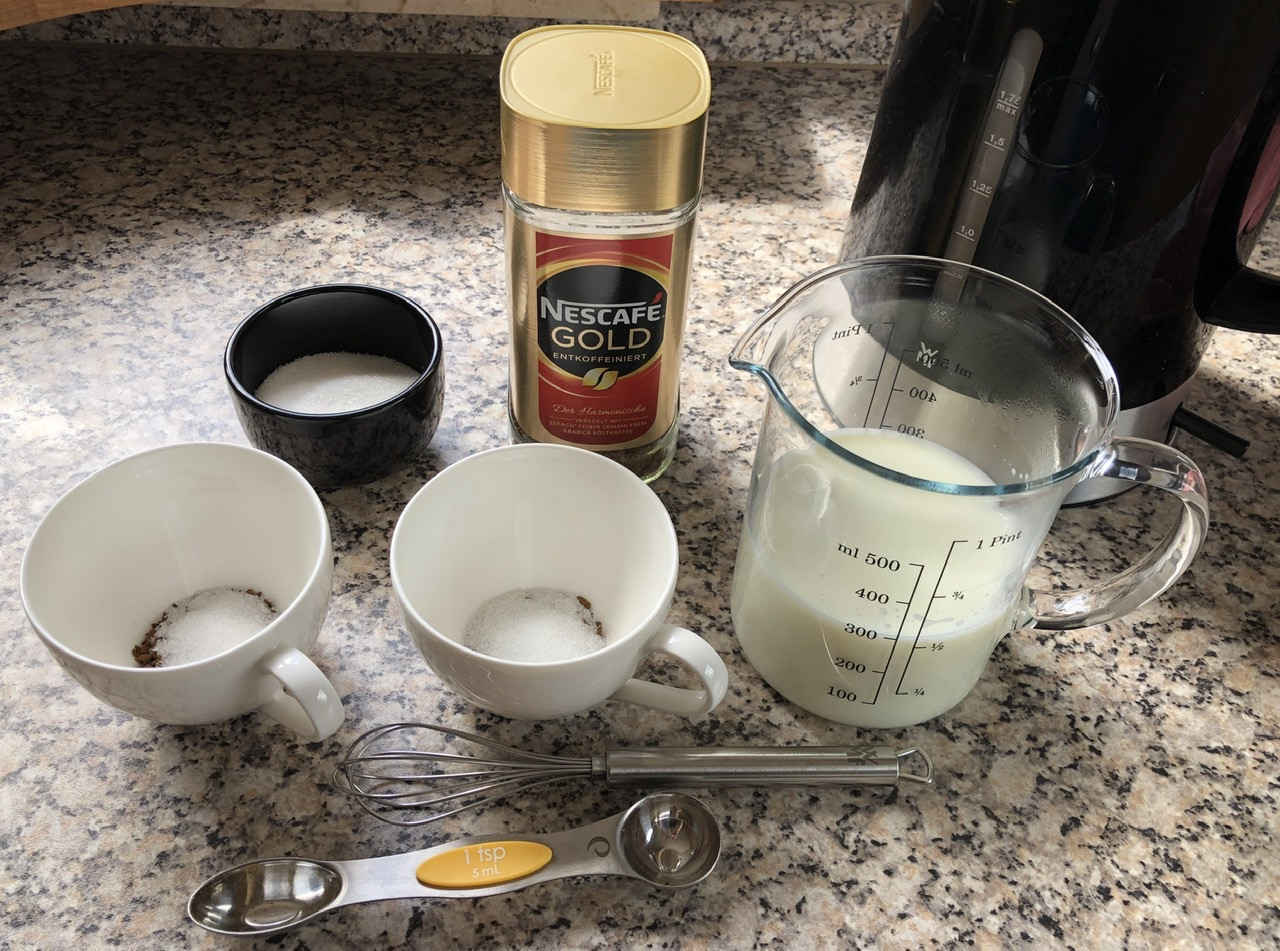 Two identical cups with one teaspoon instant coffee (Nestlé Gold decaf) and white sugar each. I used a measuring spoon to make sure that each cup had the same amount of product in it. 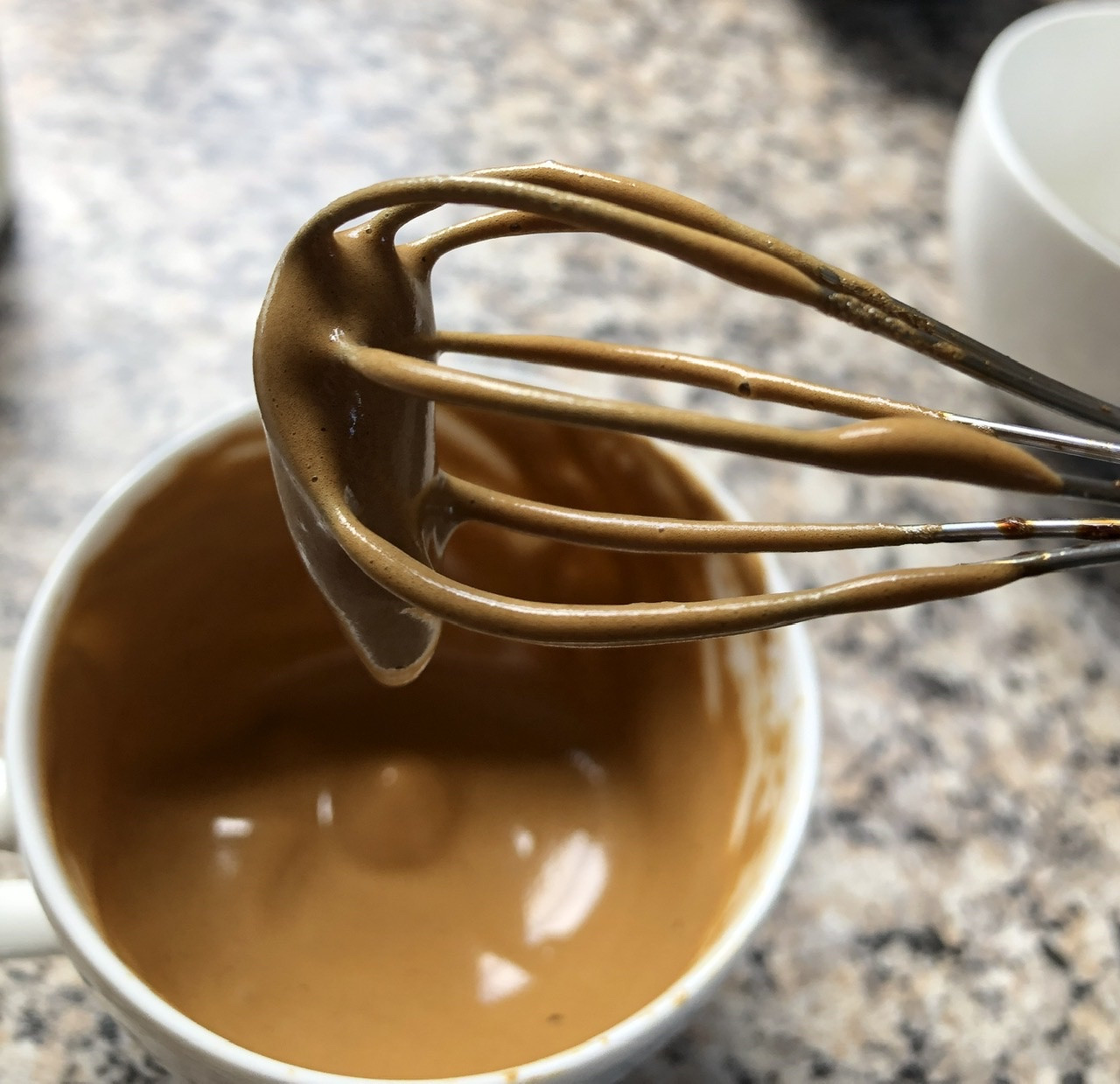 On previous occasions I used an immersion blender with a whipping disc and could make a stiffer foam. But with the comparatively small amount, that wasn’t an option. Plus the linked video also whisks by hand.

I then poured hot milk and hot water into both cups, using a kitchen scale to ensure that both cups held the same amount and the same ratio.

Initially the whipped cup had a foamy layer that looked good and gave a slightly different mouthfeel. (First taste test.) 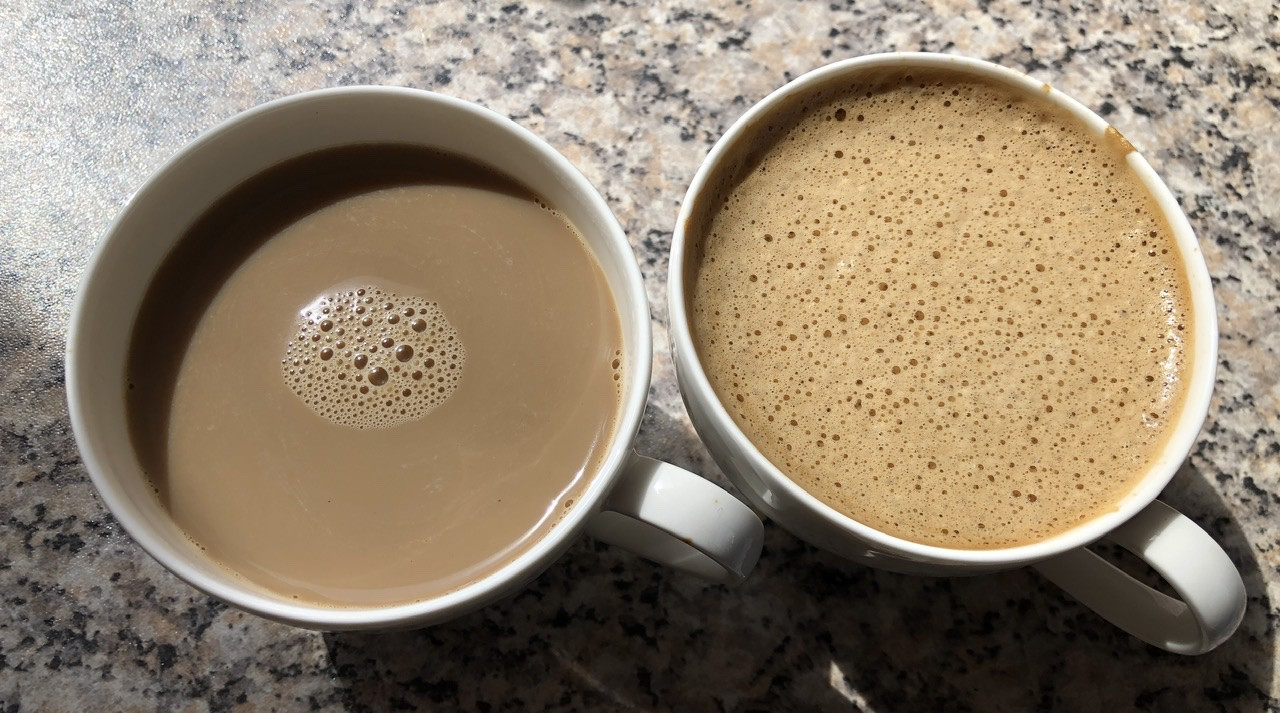 However, the foam started collapsing almost immediately, and about two minutes later, there wasn’t much left. I gently pushed it to one side to show the thickness of the layer. 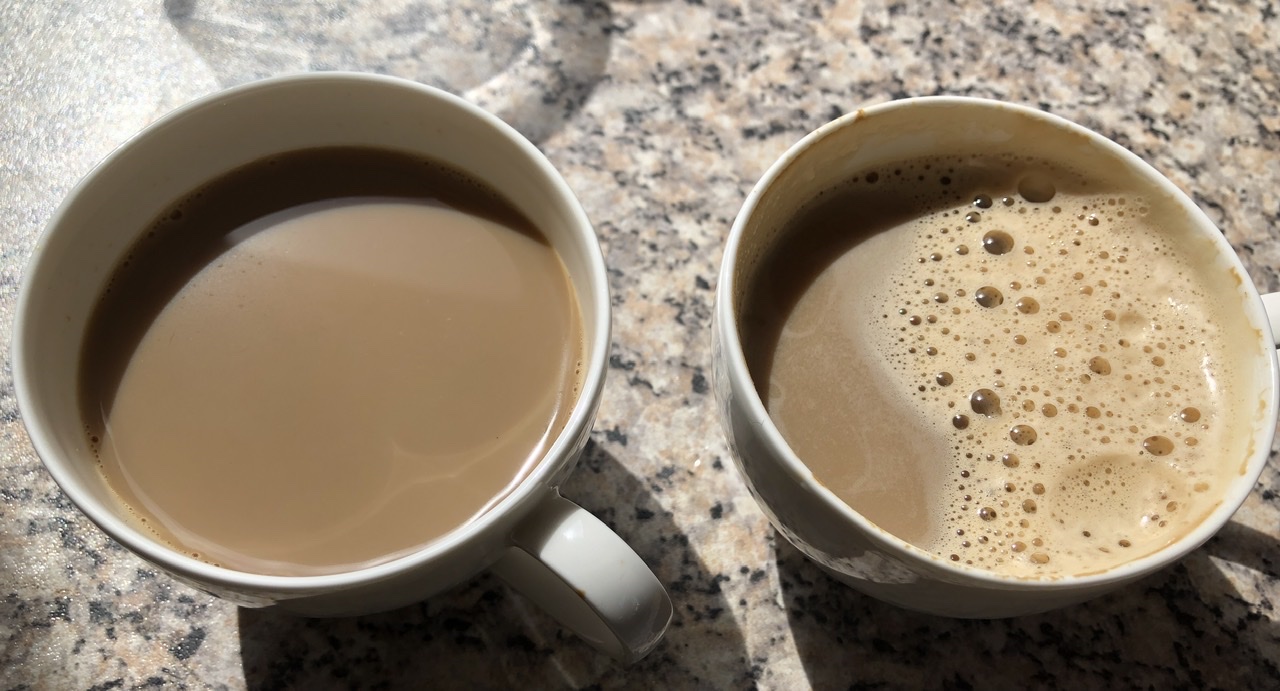 I enlisted the help of a family member and did a blind taste test.

And here are the results:

Without the foam, there’s no taste difference whatsoever between the two methods.

Frankly, for a plain cup of instant coffee, I wouldn’t bother with all that stirring and whipping.

Basically, all the method does is aerate the mixture, pre-dissolving the solids slightly.

I can't see how it can possibly affect the flavour unless the resulting 'crema' [for want of a better description] might affect the taste perception, as it does in real coffee. It may make it just look better.

With spray dried coffee there's not much else you can do with it. Nothing is ever going to make it taste like coffee.

Not the answer you're looking for? Browse other questions tagged instant dalgona or ask your own question.

1
Stirring Nescafe before filling the mug