Ok, so basically 6 years ago I bought a Breville Venezia espresso coffee maker.

I am really happy with the machine, as it still works after 6 years of relatively frequent use. But recently out of the blue, my filter holder had an issue where the flow divider just burst free.

The next picture shows the parts I'm referring to: 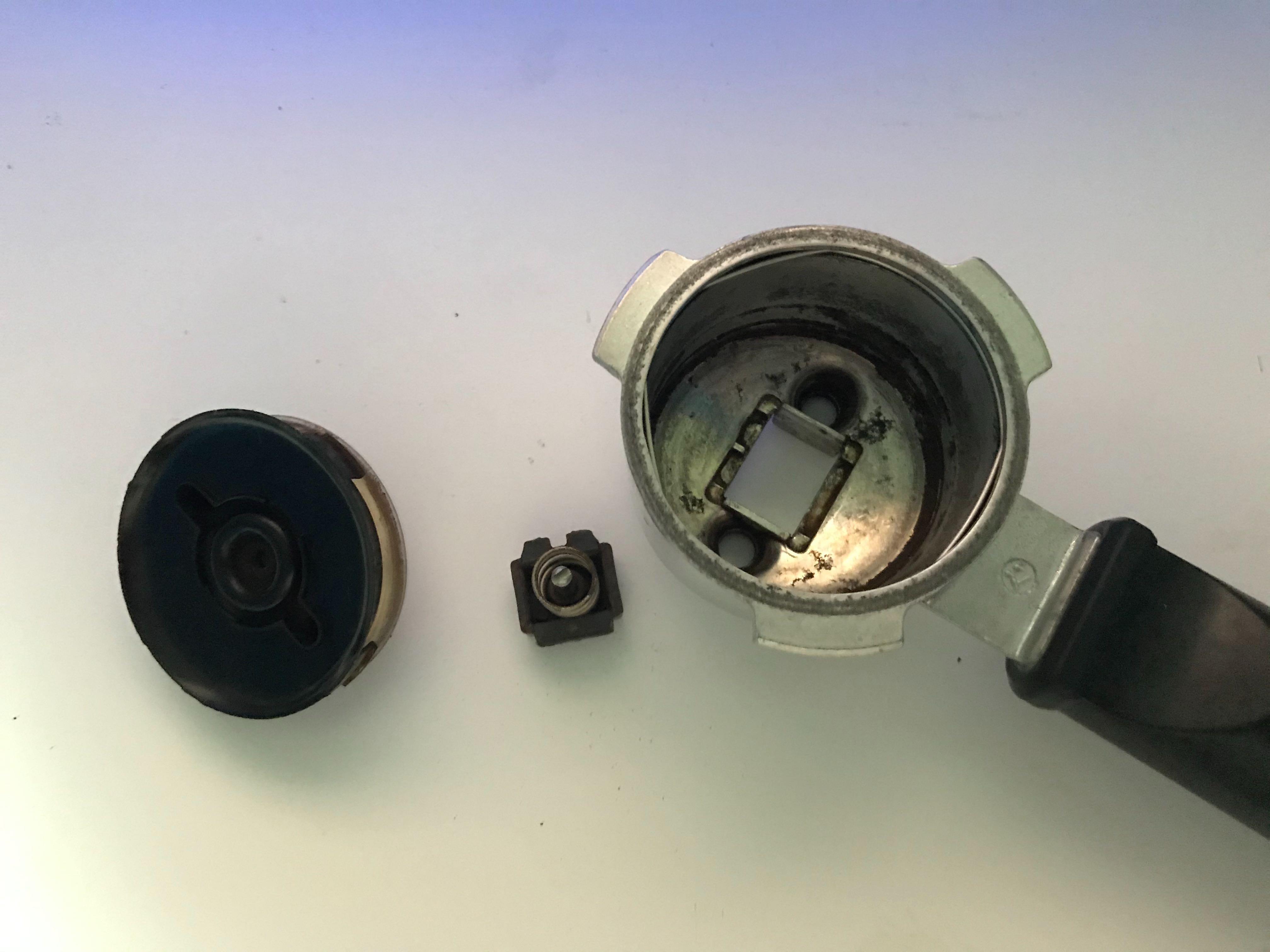 I found some options on ebay, but the average price went around 60-70 USD for the filter holder, and for a machine that cost me about 250 USD, I am not sure if it's worth it.

Is it feasible to stick the flow divider with silicone or some kind of glue? I mean the filter has some clipping mechanisms, but I think they no longer hold, so would a permanent glue / fixing work for this? Is there some health risk related to the glue / silicone and the coffee? I mean the flow divider has small tubes that exit the whole metal structure and where the ejector button is, there's a small rubber isolation.

If I had the budget I would probably look for something more Pro level, but it's not an option at the moment and as I mentioned earlier, it works fine, except for this tiny issue.

I had been using an espresso maker for several years, but the group head on that is a lot less complicated.

I don't quite understand the point of the spring. The group head on my old machine looks like this: https://images.saymedia-content.com/.image/t_share/MTc0NjIwODYwMDg5NTc1NDE0/review-of-the-oster-prima-latte-espresso-cappuccino-and-latte-maker.jpg

Maybe you can skip the spring part, and put this filter holder in just to make sure the two exit holes align well, then use the machine as usual? You may need to take things apart to clean after each use.. but sounds like that shouldn't be too hard?

I ended up buying a generic portafilter which had the same measurements and shape and it worked fine. It cost me about 30 USD with shipping which was acceptable.

I also saw some posts related to the isolation silicone ring inside the shower, so I also changed that (unscrewing it was difficult) and the machine is like new.

As for the specifics:

Not the answer you're looking for? Browse other questions tagged espresso coffee-machines filter or ask your own question.

4
How could I fix espresso that pours too fast?
2
My home machine is broke. The single basket works but the double basket doesn't. Can baskets be broken/worn out?
1
What kind of coffee machine can process powdered coffee?
1
Conversion of Krups Nespresso Machine to Ground Coffee?
3
What measurement should I take to buy an atmospheric filter for my espresso machine?
1
Inconsistent Espresso
2
Inconsistent flow rate of espresso with ESE pods
2
"bald" spots when brewing espresso, seen with naked portafilter