Is it possible to airlock a V60 brew?

I'm brewing coffee on a V60 mounted directly on the mug that will be used for drinking the coffee (no dripstations). Starting from the third pour, the water was taking too long to go through the filter, making the total brewing time of my cup (300ml) was around 7 minutes, while I was trying to replicate the 4:6 method by Tetsu Kasuya, which takes around 3 minutes and a half. After watching a video about the design of a Chemex and its side channel that lets air flow from the down chamber out of the system to prevent airlocks, I thought that the same could be happening in my system.

As a way of counteracting this, I've 3d printed three pieces that I can attach to my mug and create a gap between the V60 and the mug, shown in the Picture 1. At the same time I got an weighting scale (I didn't use one before this) and my brewing time was significantly reduced.

Is it possible that I'm overthinking the problem and the pieces aren't doing anything, and the brewing was faster just by using proper amounts on each pour (by using a scale)? 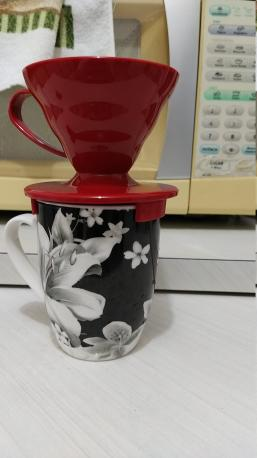 Looking at the question from another angle, there’s nothing that would prevent an airlock, except your little pieces, of course.

The chance that the filter holder and the cup rim fit so perfectly for an instant lock is slim, but you shouldn’t underestimate the power to a bit of condensation when it comes to creating a seal. I had a similar problem just the other week when bottling hot syrup with a funnel without ridges: The first one or two were fine, after that, I got that splashing whenever the water film tore for a moment and ultimately had to lift the funnel ever so slightly over the bottle rim to ensure a steady flow. I have had issues with airlock when using a porcelain Melitta filter holder, so I can totally confirm that some types of filter holders do tend to seal.

Even one of your plastic pieces should already be enough to prevent the issue.

Not the answer you're looking for? Browse other questions tagged brewing-process v60 or ask your own question.

19
End result of Americano vs Long Black?
8
Make my coffee stronger without equipment
11
Hario V60 Plastic Dripper vs Ceramic Dripper: Is there any difference in brew quality?
10
How can I improve this Chemex cold brew method?
14
What water temperature and pour speed are best for pour-over method?
8
Why do some grounds float and others sink when brewing by pour over
13
Differences between Chemex & V60
14
Brewing Coffee with instant hot water tap
0
Ideal brewing time for 3-cup Chemex?