What's the rationale behind this placement of the pressure gauge?

I recently got an E61 single-boiler machine (ECM Classika PID) and am trying to understand how it all works.

I haven't been able to deduce any reason for how/where the pressure gauge is connected. It's at the end of a long, coiled capillary tube that connects just downstream of the pump: 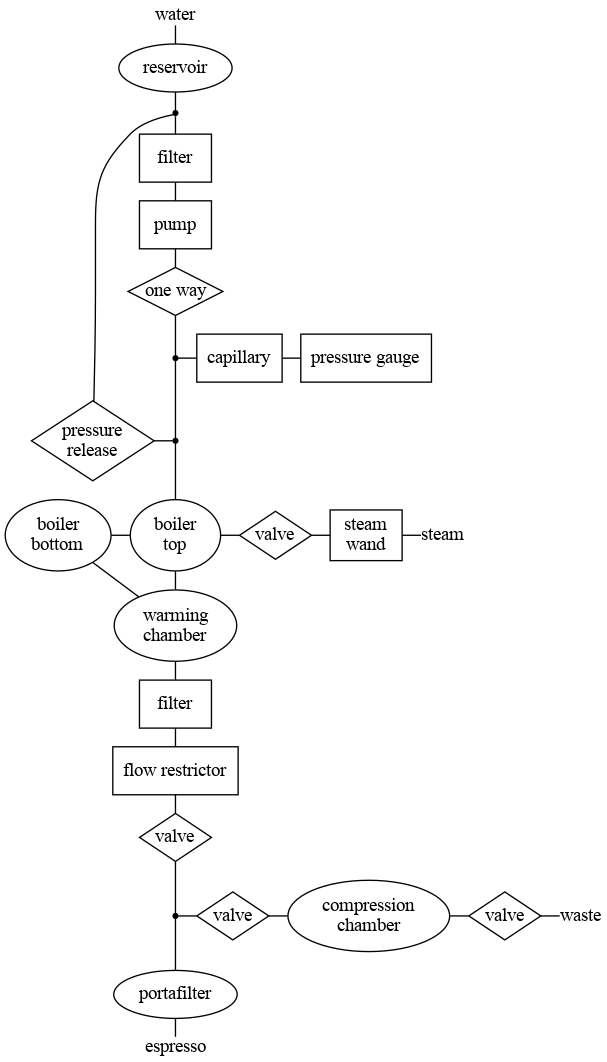 Is there any particular reason for the pressure gauge to be connected here, as opposed to e.g. downstream of the boiler?

It's likely connected there to ensure only cold water goes to the gauge.

Over time, hot water would negatively affect the gauge and, in a capillary tube, more rapidly deposit minerals and clog.

This is a catchy question. :)

By tradition, all pumps have a pressure gauge at the end. So, tradition it is.

If you wonder why it is a common place to put a pressure gauge; the reason is if you don't monitor and control the pressure at the pump end the results could be catastrophic. Imagine that something blocks the output of the pump and you didn't monitor it. The pump will try to push the block with all its might. So, the pressure will rise up to the maximum and very probably, the whole set up will blow up.

Then, you see that there is a pressure release valve on the chart (Looks like a simplified P&ID). When the gauge reads above normal, this valve protects the device from excess pressure by releasing out the steam to the atmosphere. So, now we have a safe pump.

I would like to mention one more thing. The flow goes from higher pressure to lower pressure. Saying in reverse, to make the steam flow, the pressure at the pump end should be slightly higher than the boiler top. So, the gauge should deviate slightly from its steady position temporarily when the pump is in action. You may try to observe this to validate my reasoning.

Edit: Sorry, I mentioned that the pressure release valve releases some steam to the atmosphere. I assume, the reservoir has atmosphere pressure. The released steam will probably get mixed with the liquid water in the reservoir.

Not the answer you're looking for? Browse other questions tagged espresso-machine or ask your own question.