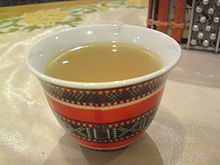 2
Coffee in Jordan vs Turkish coffee
6
Do the size and shape of a cezve matter?