Are robusta and arabica the only bean varieties?

On this site, and virtually everywhere, I hear people speaking about coffee in terms of "arabica" or "robusta". I know these are two coffee varieties, but are there others as well? Why aren't those as popular? Where can they be found?

There are several varieties of coffee that have all derived from the three species of Coffea genus of the Rubiaceae family: 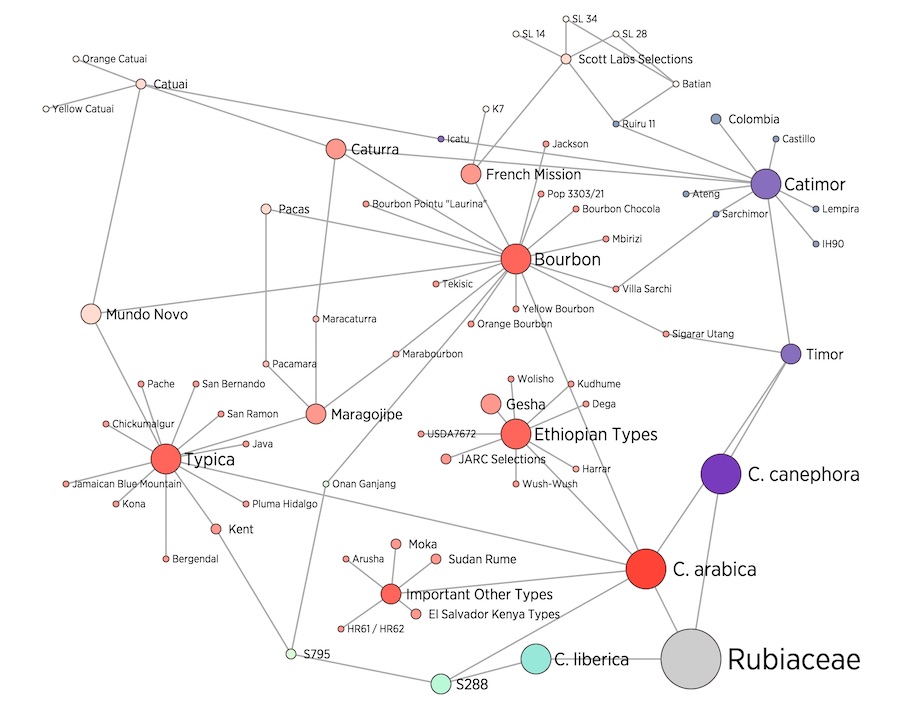 As you can see from this Counter Culture graph, each variety has a unique lineage, likely designed to grow well in a specific climate and geographical region while producing a unique profile once brewed.

Coffee can be treated much like Wine: terroir and variety is key to growth, but then roasting and brewing is also extremely important for the final cup. Several artisanal single-origin roasts will feature tasting notes, variety, and growing region to accommodate your shopping experience when reviewing what is in season.

A Bourbon variety grown in the volcanic region of El Salvador will brew a completely different experience compared to the highly-prized Gesha variety grown in Columbia, even though they can both be traced back to the Arabica species.

For more info on what to expect from these varieties, check out the Stumptown Guide to Coffee Varieties.

Coffea Arabica and Coffea Canephora are the only two species of plants whose beans we use to make coffee - Arabica and Robusta respectively.

However, you may have heard of other 'types' of coffee that might be confusing. For example Peaberry Coffee is not actually a separate bean type. 5-10% of harvested coffee berries contain only one bean (instead of two). These are usually discarded, but sometimes are collected and sold separately. They are normally Arabica beans.

Furthermore, since 2008, 9 new species of coffee plant have been discovered. These are not currently cultivated for beans though, as far as I can tell (though some species contain traits which would be desirable1 - self-pollination and caffeine-free beans).

1. Desirable for some people...

Intended mostly as an adjunct to @fredley's answer, but content overflowed a comment, then I kinda went overboard.

Though there are two (major) species of coffee (whose binomial names are indeed Coffea arabica and C. robusta with significant biological differences), there are a very large number of cultivars -- plants and seeds that are selected, or selectively bred, for certain properties, or simply cultivated in a particular area, but these cultivars are still (biologically speaking) the same species. Here is a list of (some) coffee varieties; see note [1]. Perhaps you've seen some cultivars listed on packaging, like Harar, Java, Kona, or Yirgacheffe. These can (but don't always) also indicate a region of origin (e.g., some cultivars are only grown in certain regions).

There are analogies to other plants, like the many cultivars of the following, for examples:

As with tea and wine, other coffee-like beverages (though not actually coffee) can be made out of stuff like the roots of chicory. You can also make a beverage out of the coffee cherry itself or the husks thereof; see also this question and my answer.

[1] - There is distinction between cultivar and botanical variety but it isn't crucial here.

@To complement on the previous answers.

About the Rubiaceae families that are used for producing a good cup of coffee. Besides the Arabica and Robusta families, you also have very good coffee coming from the Liberica family. I've tasted several Liberica varieties, they make a very unique cup. This variety is quite common in South East Asia where it was introduced to counter the coffee leaf rust.
You also have the C. Eugenioides This variety is one of the 2 parents of C. Arabica. I don't know of any comercial plantations of this variety it was cupped for 'variety' tasting during the 2015 SCAA Specialty Coffee Symposium and I know of specimens planted here in Costa Rica.

About the genetic variation inside the C.Arabica family. This study classifies 40 different varieties of the C.Arabica family by their genetic markers. Among other things, it shows that the Bourbon varieties are very close to the Arabica Tipica, while varieties like Geisha, Purpurascens and Maragogipe have much more significant differences.

18
Coffee Bean Vs Espresso Bean
7
What factors contribute to differences between coffee beans?
11
Yemenite tea-like coffee?
2
What are the different varieties of coffee- understanding the nearest coffee shop menu?
1
Understanding Coffee Bean names as they relate to roast