How can I make filtering my cold brew easier?

I use the "plunging" method of cold brew, and filtering the grounds out of the brew --I use a coffee filter in a funnel-- is very time-consuming (although thankfully it doesn't take me the "hours" this person describes).

How can I reduce the time and labour of filtering the grounds out of my plunged cold brew coffee?

Use a tea infuser!

I got a tea infuser with a very fine mesh and put my grounds in that. It holds fewer grounds than I used with the "raw" plunge, but it's much more pleasant to use: I just pluck the floating infuser out of the pitcher and empty the grounds from it. I may get a second filter, or a larger one, but for now I'm content making coffee more often because it's less of a chore each time.

There's no visible particulate in the resulting drink, though if I run the brew through a filter (which is a heckuva lot faster, as there's no clogging of grounds at all!) it comes out with a small amount of lint-like residue. And the last cup in the pitcher is much stronger than it used to be, but I'm not exactly complaining about that.

You could also go for an intermediate approach, using a tea strainer before you run the brew through a regular filter: that'll get the big stuff out fast so your filtering doesn't slow down. (Also, put a teaspoon in the funnel under the filter, so the grounds don't stick to the sides of the funnel through the paper. It gives the liquid more room to flow.)

I tried making cold brew for the first time recently and I just poured the whole mess through the reusable metal screen filter that came with my cheap drip coffee machine.

My drip machine is the style where the top opens to add both coffee and water sort of like this: 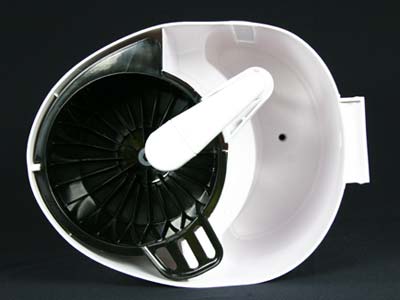 So I just put the metal filter in and poured the cold brew straight into the filter allowing the filtered brew to flow into the regular pot below.

It worked pretty well for the 8 cups or so that I made and it looked like I probably could have gotten away with pouring a bit more.

Well this idea was not entirely mine. Some of my senior colleagues gave me this idea a long time ago. When I make Cold Brew, what I do is:

Container brew and discard the sludge

As detailed in this answer, make the cold brew in a container. The grounds will settle to the bottom.

When you serve yourself, pour gently and the grounds will remain on the bottom. Discard the bottom inch of coffee (depending on the container). No filtering at all.

I have a Bunn airpot brewer and I just take the oversized specialty coffee basket and stick it on top of my french press. It works ok, but I would like to see better. Even using this method and having a very large filter, it still gets clogged up after about 4 cups of concentrate, and that's after pre-filtering using the french press filter to get the majority of the grounds out.

Not the answer you're looking for? Browse other questions tagged equipment cold-brew filter or ask your own question.

22
What do I need to start cold-brewing?
3
How can I make coffee without a machine?
14
Is it possible to Cold Brew using an Aeropress?
16
What coarseness of grind works best for cold brew?
8
Best filter to use for cold brew?
7
How to make cold brew concentrate?
5
Using just a filter without a pour-over to brew coffee