What is the history and significance of the "Anthora" coffee cup?

Five years ago, my cousin brought back a souvenir porcelain "Anthora" coffee cup which is apparently a cultural icon of New York City. What is its history and significance; and is it still widely used in NYC today?

The Anthora is a paper coffee cup design that has become iconic of New York City daily life. Its name is a play on the word amphora.

The cup was originally designed by Leslie Buck of the Sherri Cup Co. in 1963, to appeal to Greek-owned coffee shops in New York City, and was later much copied by other companies. The original Anthora depicts an image of an Ancient Greek amphora, a Greek key design on the top and bottom rim, and the words "WE ARE HAPPY TO SERVE YOU" in an angular typeface resembling ancient Greek, for example with an E resembling a capital sigma ("Σ", a letter pronounced like English "s"). The blue and white colors were inspired by the flag of Greece. The cup subsequently became the metropolitan area's definitive coffee-to-go cup.

Sales of the cup reached 500 million in 1994 (when it was by far the most popular design for the company's cups), but had fallen to about 200 million cups annually by 2005.

I also found this article about its history and cultural significance posted on May 16, 2017 By Devin Gannon at www.6sqft.com:

In a city full of symbolism, from bright yellow taxis to black-and-white cookies, New Yorkers also find comfort and nostalgia in a certain cardboard coffee cup. Known as the Anthora, the blue-and-white drinking vessel first became an icon of New York City in 1963 when Leslie Buck, a Czech-American immigrant, designed the first ever to-go coffee cup to appeal to Greek-owned coffee shops and diners (...) The height of sales was in 1994 when Sherri sold over 500 million cups.

After the Solo Cup Company bought Sherri in 2005, about 200 million cups per year were sold. A year later, with sales at a standstill, Solo Cup decided to halt its large-scale distribution. The company kept the design alive by selling its licenses to souvenir shops and restaurants. For example, MoMA’s gift store sells a ceramic version designed by Graham Hill in 2003, and many online stores like Amazon and UncommonGoods sell similar products. And it’s been seen in multiple movies and television shows set in New York; actors held the famous Anthora in hit shows like the Sopranos, NYPD Blue, Mad Men, and Law & Order.

The cup made an official comeback to the city in 2015, after the Dart Container company received many requests to bring it back to New York.

The triumphant return of the Anthora cup to New York was announced in this article dated 12/17/2015 at https://www.dartcontainer.com/news/news-archives/news-stories/2015/12/the-comeback-cup-an-iconic-product-returns-to-the-new-york-city-market/:

The Comeback Cup: An iconic product returns to the New York City market

The original is back! The Anthora cup – once dubbed perhaps the most successful cup in history by The New York Times – returned in July as a regular stock item in the New York City market (...) “We had some competitors in the market who were selling knock-offs of the print and our sales people asked us to bring this cup back” (...) The cup and its retro look is expected to appeal to coffee-shop veterans who are familiar with its history as well as young customers who may be seeing it for the first time (...) Coffee sellers and drinkers don’t have to settle for pretenders anymore. The true Anthora – called iconic, ubiquitous and symbolic in its heyday – is ready to take its place as the comeback cup.

The cups not only caught on quickly, but have become so symbolic of New York City life that they have been recreated in a ceramic version. Now a 10-ounce reusable cup is available that looks exactly like the original paper version. 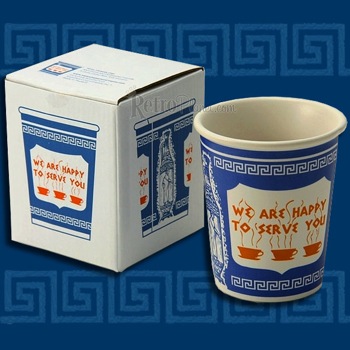 Yes, this is the pattern of the ceramic cup my cousin brought back as a souvenir from New York a few years ago.

Not the answer you're looking for? Browse other questions tagged coffee-culture history or ask your own question.

6
Do we know when the first cappuccino was brewed and how it acquired its name?
3
What's the history and content of Coffee Cantata from Johann Sebastian Bach?
7
History of short and tall sizes
5
Why did espresso never catch on as a mainstream drink in the US?
6
What is the history of coffee?
0
Is there really a NATO standard cup of coffee?
4
What is the most effective way of consuming coffee (and caffeine in general)?
1
Inconsistent Espresso