Milk in place of water

What would happen if one were to substitute milk in place of water for the following brewing methods:

Would it extract anything from the coffee grounds? Would it create something passable?

For the first attempt, I brewed it exactly like I brew my normal (water-based) coffee. I used a French Press with a light/medium roast, heating the milk in Pyrex in a microwave. The milk heated unevenly, curdling in places. Luckily, the curdled bits stuck to the Pyrex and I was able to make a passable cup. The thickness of the milk meant that it didn't want to pass through the mesh when pouring.

The predominant flavor was that of the milk. I could barely tell it was coffee, though it definitely absorbed some flavor. The texture was about what you'd expect--very smooth and rich. It was the kind of drink that makes you feel all warm and fuzzy inside.

From my first attempt, I learned that milk is able to absorb and mask coffee's flavor incredibly well (after all, it's what people use to tone down overly strong coffee). This time, I heated the milk in a saucepan over low heat, stirring frequently (a rather long and annoying process for a single cup of coffee). I probably could have gotten it a bit hotter, but it worked well enough. I nearly doubled the amount of grounds and brew time.

This time, it came out with a distinct coffee smell, and about the same texture. Again, the initial flavor was that of the milk, but it had a smooth, subtle, and quite pleasant coffee aftertaste. I never got that bad taste you sometimes get a while after a normal cup of coffee--instead, the residual flavor was like you had just taken a sip.

I wouldn't want milk-brewed coffee for my morning cup. It feels more like a drinkable dessert.

If anyone else wants to try this, I recommend using some stronger/darker coffee. I didn't have any dark roast on hand, or I would have tried it. Give it time to brew--more than you would with water. Be patient when heating the milk, or you'll end up curdling it and ruining the whole thing.

This could probably work as a dessert drink if brewed with some spices in addition to the coffee. If nothing else, I'd say it looks pretty cool as you can see in the attached image.

I tried this again today with espresso coffee (Cafe Bustelo), and it turned out great. The end result was like a latte but more... dull, or smooth. I don't know how exactly to compare it. Espresso grind is definitely the right choice when brewing with milk--it's the only thing strong enough and with the right flavor profile to stand out in the milk and complement the milk's flavor.

Be warned, though, that the fine grind of espresso coffee means you will need to use a paper filter at some point along the way. Sticking a paper filter in a French Press doesn't work because of how resistant the milk is to going through the filter. It seems to jet around the sides, allowing the espresso to slip through. 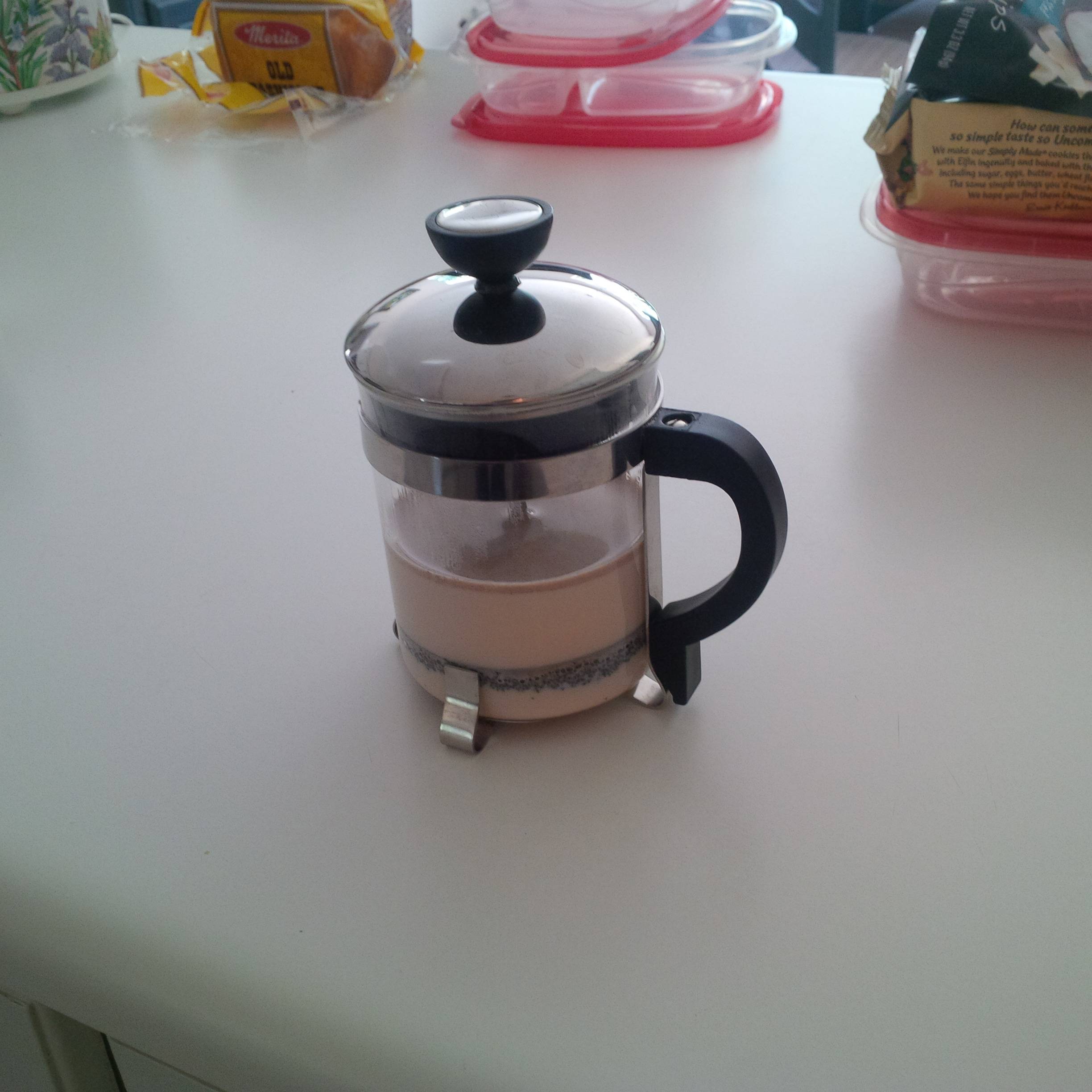 Milk doesn't work well for brewing, primarily because of the calcium and sugar (lactose).

Calcium is one of the minerals in "hard water" that will build up and clog pipes. You're going to be left with calcium deposits in whatever you boil the milk in.

Sugar burns, and will coat anything in a black hardened mess when cooked or boiled. It's never a good idea to cook or boil sugar in anything, and boiling milk for coffee is no exception. Sugar can be baked, and used as a sweetener in anything that doesn't get cooked or boiled. Sauces that contain sugar should only be applied after cooking or boiling.

You will get some function out of using milk, because it's a solution of water, vitamins and minerals. However, the function is coming only from the water, and everything else is a detriment in some way. Therefore, you're better off brewing with the purest water you have access to, and combining with milk afterwards.

I think it would be harder to extract everything that you would like from the coffee with milk for a few reasons.

I just tried cold brewing with milk and I found it pretty delicious. It was definitely more milk flavored than coffee flavored, think chocolate milk but instead coffee milk(duh :p). I only brewed it for 3 hours, probably could have brewed it for four and still been fine.

Basically don't try to replace water with milk in a Moka Pot. You'll clog the brewer up with curdled milk, and either you will spend a ton of time cleaning it, or you will just throw it away.

I think there are going to be a few problems with replacing water with milk.

I just saw a mention of brewing espresso with milk.. For readers in the future DO NOT put milk in an espresso machine (This isn't what the writer was intending, but it is easy to misread).. Putting milk into a boiler on an espresso machine is a sure fire way to add some weight to your trashcan, or cause significant damage. This is the entire reason why you purge your steam wand, to prevent milk from being pulled into the boiler. Long story short, it will cause bacterial growth inside the espresso machine inside the small components which will require a complete break-down and cleaning, something that on a small machine would cost more than replacing the machine, and on a large machine will cause long downtime and very high repair costs.

I have managed to brew an interesting milk coffee in the ibrik. In order to minimise deposits and burning on the inner surface, I agitated the ibrik gently throughout the process and kept the temperature below 93°C (199°F) monitoring it with a tea thermometer. Unlike the French press method, no filtering is required even for the finest grind, because properly brewed coffee sets down after releasing light components.

I still had thoroughly to scrub the ibrik afterwards, so I recommend a lower temperature and a longer brewing time. Will edit the answer after my second attempt.

Ant_222Ant_222
101
Add a comment  |
Highly active question. Earn 10 reputation (not counting the association bonus) in order to answer this question. The reputation requirement helps protect this question from spam and non-answer activity.

Not the answer you're looking for? Browse other questions tagged brewing-process milk or ask your own question.

1
Is brewing coffee with milk instead of water a bad idea? And if so, how bad is it?

66
How can I figure out how much caffeine is in my cup?
10
When accounting for bloom, why is the common instruction to stir with very little water?
8
Make my coffee stronger without equipment
10
Why must the milk be frothed?
8
Why do some grounds float and others sink when brewing by pour over
2
Vessels for frothing and pouring the milk
2
Instant coffee to powdered milk ratio?
7
Does longer brewing time with hot water negatively effect flavor?
3
Why are Costa or Starbucks lattes so good?