Does a percolator make "better" coffee?

I've heard from a friend that she uses a percolator instead of the "regular" brewer. I've never used or drank coffee made from a percolator, is there a difference? Does it make better coffee?

This might be a subjective question, I don't know. Just want to hear your thought on it.

First things first, you should decide if it's better than any other brewing method, or not. Decide your cup by tasting and experimenting. (By the way, it's unclear what you mean by "regular brewer" in your question. According to my experience, there's no regular way of brewing coffee.)

Actually, you should understand how it brews as a first step. The water in the container boils, gets through ground coffee, drips over the container again. Therefore, you can fine tune brew time. You may brew for a short time for mild coffee or brew longer periods for intense cups. There are nice schemas of how it works in Wikipedia.

You may also want to see similar questions on this site just like:

If not, it's not. But evidently, it is for your friend.

While I don't use one at present (nor own one at present) I've stayed at a place where a percolator similar to the image was the only option for coffee, and it was fine. I've also had percolated industrial-scale (30 to 50 cup percolators) coffee that rates quite decent (though that also depends on operator and ingredients - I've had terrible coffee from the same machines.) 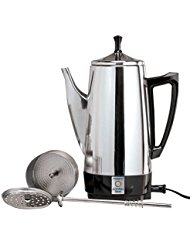 Of course, when and where I grew up, a smallish percolator like this WAS the "regular coffeemaker" in the majority of houses, and a huge one was standard at larger gatherings. I think ours had the "glass knob on top where you could see what color the coffee was" feature this one lacks. Automatic drip was years later, at least in our area. Weird radicals used a Chemex. But I did not return from staying at the place with only a percolator and go out to buy one (dirt common in second-hand stores, cheap, as the generation that had them and hung onto them are dying off and having their houses cleared out.) Not quite that nostalgic a taste for me.

Currently drinking French press, most days. Next year, who knows?

I've been getting the idea that percolated coffee has a strong retro component to it. I remember my family had one of these as I grew up: 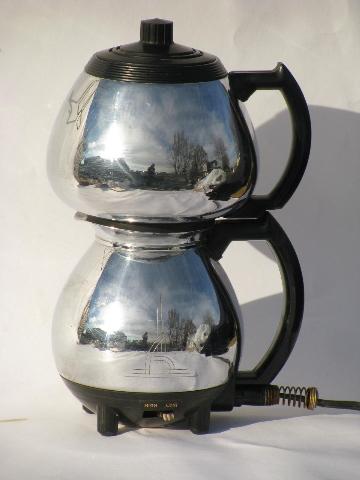 But it is highly subjective whether or not a percolator produces a good cup of coffee or not. But what is really cool, is that for a reasonable amount of money, you can purchase a brand new stove top percolator that you can try out for yourself. If all it does is bring back some memories, good enough. You might even think you've never had a better cup of coffee. A cup of coffee from a pot of fresh percolated can be pretty darn good.

Do I think percolated coffee is better then a CCD where I control the exact amount of grind, water, water temp and time brewing? Subjectively, no, but I wish I had my folks old percolator!

Perked coffee is about all we have here. When you perk coffee it separates some minerals & lime from the water. So what water? For best coffee bottled water is best. Unless you have sweet water from your well. A matter of taste. What you grew up with in water. Only 50% of the people here have electric. So coffee machines are not big in use here. For best use a 1 burner gas stove to perk your coffee so heat can be controlled. Brew time. Or for a special taste a good Mango wood & open pot boil it then pour threw a clean rag to filter. For that light smoke taste. Or other wood.

In my opinion, coffee can never be too hot or too strong. Percolator coffee is perfect. I've switched from drip/french press to using a perc and love it.

I love my small stainless stove top percolator. First of all, many people buy cheap drip pots. The hot water is absorbing questionable plastic ingredients that leach from the reservoir of a cheap drip coffee pot. Stainless steel gives you a clean coffee taste. Most drip makers don't get half the flavor from the coffee that a percolator can. The percolator is perfect for strong coffee. But it does not have to be too strong and it does not have to be bitter. You can make medium strength coffee in it as well. I have pleased family members who do not like strong coffee using my percolator. It is all in the heat and the proper timing. With a percolator, you can fine tune the flavor through these means. The best coffee to use in a percolator is a medium roast brewed on the strong side, but not over-boiled.

I find this the best method for me.

The coffee brew obtained by the pourover is more aromatic and tasty compared to the percolator. I have 3 different coffee-brewing devices: a percolator, pourover, and an automatic drip coffee maker, and one thing to keep it mind is, the first round of brewing is fine -- that is, put ground coffee in the filter and pour hot water (80-90°C) over it. Once it is brewed, don't pour hot water again. The resulting brew obtained in that way is more tasty and aromatic. Then, percolator coffee stands next.

Not the answer you're looking for? Browse other questions tagged percolator or ask your own question.

17
What's the difference between a percolator and a moka pot?
8
Why does espresso taste different to percolator coffee?
2
How many times can I reuse coffe-grounds to make myself a coffee until it is tasteless/useless?
1
Is it safe to say that same type of coffee used with an espresso machine is ideal for a moka pot?
1
How could I improve extraction and yield more coffee when brewing with a filter?