As a PhD student in mathematics, I like my coffee - quite a lot. But I'm also poor (because, duh, I'm a PhD student), so my funds available for coffee are pretty limited. In order to still be able to have a decent cup of coffee, I decided to invest in a nice hand grinder and an Aeropress - figuring it would pay for itself.

So, here I am, hand grinding coffee beans, a local barista recommended, brewing what I consider to be surprisingly decent coffee and still - something is wrong.

My coffee - for some reason - has a dragon curve floating on its surface!

Unfortunately - being in my office - I am not able to take a picture of it. But it comes really close to an actual dragon curve, posted below for reference. 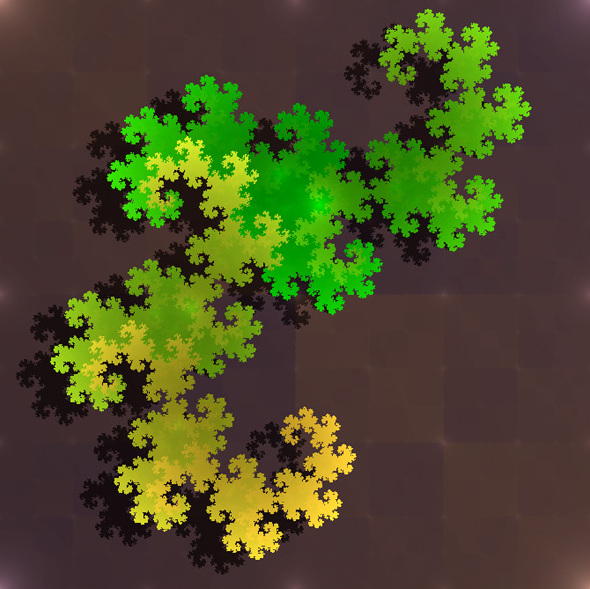 A dragon infested office clearly isn't suitable to work on ones thesis and hence I sit here, wondering about dragon curves and what might cause one to show up in my coffee cup instead...

Technical details: I'm using a fine - but thin - paper filter in my Aeropress and some blent of mostly Arabica coffee for my beans of a medium grind size. It seems most likely to me that the dragon curve I observe is made of lipids - especially since Arabica (according to a quick internet search) seems to contain a decent amount (~15%). That, however, doesn't explain its fractal appearance. I've seen lipids floating on coffee many times before, but as far as I can remember, they just formed boring puddles or were entirely absent (maybe due to using a thicker filter).

I welcome any attempt, preferably backed by published research, to explain this distracting phenomenon as well as pictures of similar curves formed by lipids on liquid surfaces (preferably coffee).

It's probably not a dragon curve, but the fractal projection of the Brownian motion of coffee lipids on the surface of your tasty beverage.

Brownian motion is best explained by statistical physics. Small atoms or molecules collide each other continuously in very high speeds in the liquids even if they seem serene. However, as the total effect (average) of these collisions are quite stable, we see a still surface.

Here you can find a very comprehensive list of fractal sketches, including the ones related to Brownian motion. Do any of them look similar?

Not the answer you're looking for? Browse other questions tagged aeropress or ask your own question.

5
In terms of taste, what is the correct way to produce a full cup of coffee using an AeroPress?
8
Coffee brewed without filter taste less bitter and sour?
6
Does using an Aeropress keep more of the coffee oil (crema)?
14
Brewing Coffee with instant hot water tap
1
What is the reason that Aeropress coffee is more digestible?
2
Does aeropress coffee change flavour after several hours?
1
Aeropress: coffee starts flowing as soon as I flip it?
0
How to make a thick coffee with an AeroPress? I end up with a watery drink and an over-brewed aftertaste