I have been buying de Longhi coffee machines for a while now and they seem to be getting worse. I started on a Delonghi EC152 which was low cost and pretty reliable. Then when my 2nd one died, I tried to order a replacement but it had been discontinued and so equivalent model was a EC146.B which was really poor. As luck would have it, or so I thought, I received another de Longhi as a present, an EC 270. But this leaks like crazy after only a few weeks. If you fiddle with the valve on the water vessel it stops leaking for a few hours.

So I would like to buy a coffee maker which doesn't leak and which will last.

Willing to spend a reasonable amount to get something that will last.

I am looking for a home use machine for say 1-2 cups per day. Our cooker is an electric hob - so not sure the stove types would work.

Any suggestions would be most appreciated. 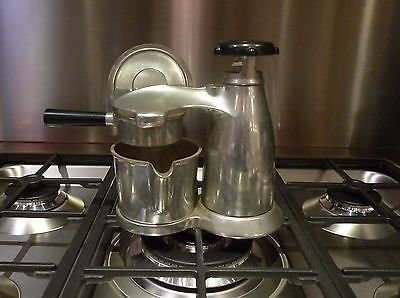 I think I put a new gasket in the Vesuviana once, but I find it more of a pain to clean than I like. Still, gotta be pushing 50 years old, pretty reliable.

Also a stovetop device, but purported espresso. Espresso snobs may say it's not real espresso.

For cappuccino there are similar stovetop devices to make steam with.

I'd thoroughly recommend the Rancilio Siliva at http://www.ranciliogroup.com/1-Rancilio-Homeline--Silvia

I moved up to this machine after 2 gaggias, and another cheaper machine. This is far superior. Fully manual but rock solid build quality, consistent. Wonderful coffee

Not the answer you're looking for? Browse other questions tagged coffee-machines or ask your own question.

2
What's the simplest/cheapest coffee maker that can make a good latte automatically?