How does drinking coffee after a heavy meal counteract the drowsiness?

General knowledge tells you that eating a heavy meal will make you drowsy since blood is being redirected for use in the digestion.

At the same time coffee does make you more alert because of some chemical effects.

Can the chemical properties of coffee really overcome the need of blood for the brain to be more active? I think that the blood flow is fundamental to avoid feeling drowsy but whenever I drink coffee after a meal I get really alert and almost feel no post-meal drowsiness.

I am by no means a biochemist/physiologist, but I will give this my best scientific go.

The main reason people get sleepy after eating large meals, "get the 'itis" as many call it, simply has to do with homeostasis. The average person's diet usually consists mostly of carbohydrates. Carbs, especially when eaten in large quantities, causes a large spike in our blood sugar. In order for your body to bring the sugar levels back down to normal, the body releases insulin.

This stimulates movement of tryptophan (an amino acid in the brain), which then leads to the increased production of serotonin, a neurotransmitter responsible for sleep. And this increased level of serotonin triggers sleepiness after a meal. - See more at: http://blog.zocdoc.com/get-sleepy-meal-weird-science-daily-life/#sthash.fseXW9aA.dpuf

Dangerously enough, constant spiking and falling of the blood sugar levels in the human body can lead to T2 Diabetes (most associated with processed sugars).

Tryphtophan is the same amino that is found abundantly in turkey may be why some people take snoozes after large Thanksgiving day meals!

Now, this brings us to the coffee portion. Coffee has caffeine which is a CNS stimulant. It increases blood pressure, metabolism, causes natriuresis (increase in saline secretion), but most obviously, may cause jitteriness, mild anxiety and alertness.

This is because when caffeine is consumed, it antagonizes adenosine receptors; in other words, caffeine prevents adenosine from activating the receptor by blocking the location on the receptor where adenosine binds to it. As a result, caffeine temporarily prevents or relieves drowsiness, and thus maintains or restores alertness.

It is not the blood in your body that affects sleepiness/alertness, rather the neurotransmitters and their chemical synapses 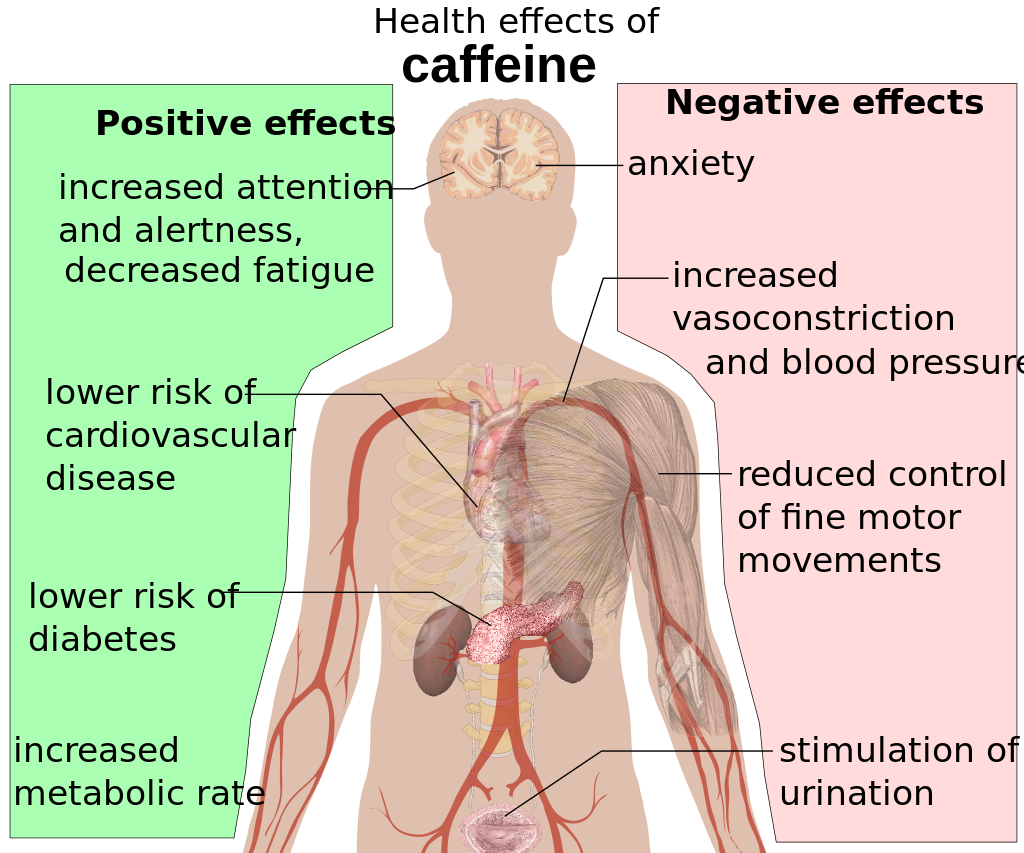 TL;DR: After eating, your body is naturally producing neurotransmitters to bring your body to a state of homeostasis. When you ingest coffee, which contains caffeine, it counteracts this and keeps you awake and alert.

Not the answer you're looking for? Browse other questions tagged health digestion or ask your own question.

10
How to prevent calcium loss when drinking a lot of coffee?
15
What constituant in coffee has a laxative effect?
13
Coffee options for those with a weak stomach?
9
What are the side effects of drinking too much coffee?
14
Why is drinking Espresso in the afternoon fine, while milk coffee is not?
15
How can I stay off coffee after I quit?
2
Would drinking excessive coffee reduce blood hemoglobin content?
1
Does drinking coffee immediately after lunch or dinner impact health?
3
Will drinking coffee affect my physique?