How can I maximize the time the "high" lasts?

I know it's individual, but in general (or at least, in average):

What are the main factors in how long does a coffee's "high" last? Can I deliberately make it last more than an hour? More than 3?

I would prefer to actually drink as less as possible, so please consider that.

If it makes it easier to answer: I'm 24, male, and my coffee intake is about one dose of espresso every other day.

Without considering the amount or potency of the coffee as well as setting personal metabolism aside, you could adjust your coffee schedule according to your natural circadian rhythm, a methodology neuroscientist Steve Miller refers to as chronopharmacology. Essentially, you use the caffeine as a propellant to your natural "up" rhythm. Gabrielle Taylor's article does a fine job of explaining this:

When you drink coffee during the time when your body is already releasing cortisol, it won't have as strong an effect. Ideally, you want to get your caffeine during the lulls between cortisol spikes—otherwise, you start to develop a tolerance and have to drink more to get the same effect.

Assuming you're on a regular sleep schedule, your cortisol levels naturally spike about an hour after you wake up. If you get up at 7 am, your body is naturally most awake between 8 and 9 in the morning, noon to 1 pm, and again around 5:30-6:30 pm.

So, based on a wake time of 7 am, the best times to drink your caffeine vehicle of choice are 9:30-11:30 am and 1:30-5:00 pm. Obviously you can adjust the schedule according to your own wake time if it's earlier or later.

Some upperclass chemistry students at the University of Delaware put together a nice site that summarized the effects of caffeine (http://udel.edu/~danikoll/index.html), but it has been removed. (A snapshot is available in Wayback Machine.)

Particularly relevant was their description of metabolism of caffeine:

Caffeine is absorbed in the small intestine, metabolized in the liver cell and distributed to body tissues within 45 minutes of ingestion.

A technical term in the literature is "oral clearance", meaning the rate at which a drug administered orally is removed from the body, the three elimination pathways being renal, hepatic, and pneumatic. As the references in the above link document, caffeine is eliminated primarily by the liver breaking it down into paraxanthine (84%), theobromine (12%), and theophylline (4%). While these last two compounds have some CNS effects, it is believed that largely caffeine itself acts by competing with adenosine for adenosine receptors. 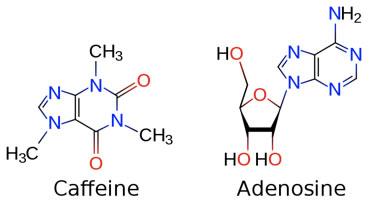 The simplest way to extend a caffeine buzz (setting aside pregnancy as impractical for most) is to consume more caffeine. [A more difficult challenge might be finding a way to shorten the duration of a coffee buzz.]

A 1985 study by Abernethy and Todd, "Impairment of caffeine clearance by chronic use of low-dose oestrogen-containing oral contraceptives", demonstrated that the half-life of caffeine is extended by progesterone administration.

You say that you wish to consume as little coffee as possible, so perhaps the same amount of coffee (espresso, once every other day) could be taken in divided doses. This then converts the problem into how to create an equally intense buzz with (say) only half the caffeine.

I've noticed is that a sharp reduction in carbohydrates leads (after a couple of weeks, with mild ketosis) to a stronger physiological response to caffeine.

I can only offer this as an anecdotal observation. There is research on the interaction of caffeine and glucose on cognitive processing and on the effects of caffeine consumption on glucose homeostasis. But neither topic is precisely like what I'm suggesting.

You would like to prolong the "high" that coffee i.e. caffeine causes.

Caffeine is metabolized by your liver. So anything that interferes with your liver metabolizing caffeine would extend the high, although habitual use would see this eroded by habituation.

The "half-life" of caffeine, which is how long it takes your body to eliminate half of the caffeine in your system is normally about five hours. A lot of foods, drugs and diseases can affect this though.

For example, narigenin, the enzyme that makes grapefruit juice bitter inhibits CYP1A2 and can prolong the half-life of caffeine by 30% . Oral contraceptives can double the half life of caffeine. And various prescription drugs e.g. fluvoxamine significantly extend the half-life as well.

Liver disease can have dramatic effects. One lady with alcoholic hepatic cirrhosis was reported in the literature as having a half-life of 168 hours for caffeine elimination. So her caffeine high would literally last for days after one espresso.

Unless you are taking a prescription drug that affects caffeine metabolism, your practical options would seem limited to grapefruit juice. Unless you were planning to undergo gender reassignment, then oral contraceptives would have a larger effect.

Now, we can modify espresso romano according to our needs. Normally, the espresso romano is a cup of espresso served with a slice of lemon. The lemon is served to counter the bitterness of espresso. In some places, I have encountered that a few drops of lemon juice is added directly inside the espresso. Why not grapefruit juice? Taste will be similar, additionally highness will be prolonged.

Taking caffeine in combination with L-Theanine may be linked better cognition, better mood, and a more stable high. It could possibly allow you to consume more caffeine without the classic caffeine jitters.

Many people in the nootropic community swear by it.

Study by Gail N. Owen, Holly Parnell, Eveline A. DeBruin, and Jane A. Rycroft about the combined effects on mood and cognition.

Out of personal experience, I get a pretty long and persistent buzz when I take coffee, go to sleep, and wake up 40-45 minutes later.

Funny you ask this. I can't remember the exact reason why, but I was just reading the other day that how hydrated you are has a pretty large effect on whether on your coffee tolerance. Turns out, the more water you drink, the more buzzed you feel.

If I were you, I'd be careful. It's finals for me right now, and I have so much work, you wouldn't believe. Last night, I decided to drink a medium dark roast with a shot of expresso.... boy! I had the shakes. Every time I would try and concentrate, I could literally feel my brain itch. It's like this tingly sensation that you can't get rid of. Plus, I had the shakes. I still haven't been to sleep and it's about one, here. The most I can manage is about 5 minutes at a time.. but I digress.

Drink more water and double up on the expresso. Just make sure that you sip slowly.. and with discretion.

Not the answer you're looking for? Browse other questions tagged espresso caffeine or ask your own question.

66
How can I figure out how much caffeine is in my cup?
5
What is the optimal length of time for pulling a shot of espresso?
6
When preparing a ristretto shot, should the brew time remain the same as a normale?
5
Can I leave the basket in the portafilter after pulling the shots?
4
What are the standard espresso parameters (dose, mass/volume, time, etc.)?
6
Why do I feel lousy, low, out of energy after the high coffee gives?
4
Recommended time to finish a cup of coffee for the best caffeine surge?
0
How to keep the time before coffee get out of the machine?
7
How much does caffeine concentration in a cup of coffee decrease as a function of time (roughly)?
5
Espresso: How much can coffee choice affect the porosity of the coffee puck?